Kyle has worked for / Been featured in...

Kyle is best known for revealing the “secret” hidden in plain sight: Google’s algorithm is an algorithm. In other words, it all comes down to one thing - Math.

Kyle demonstrated this by ranking number one in Google with a page consisting of gibberish text and only a handful of target keywords.

Google actually punished him for exposing their algorithm by de-indexing 20 of his test sites and creating a rule in an attempt to de-value his efforts.

Kyle has spent the past several years running more than 400 scientific SEO tests to better understand Google's algo. The combined results of those tests became the backbone of the popular SEO tool, PageOptimizer Pro, and they are implemented within his SEO agency on client sites.

Kyle also shares his techniques in podcasts, at conferences around the world, and within the platform he co-founded, IMG, a sort of Netflix for SEOs with an active community aspect. 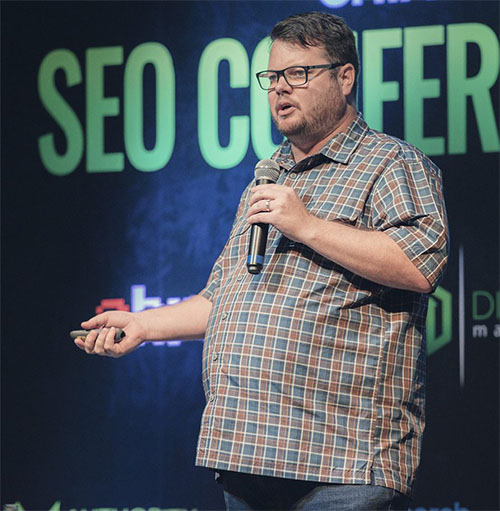 I can’t say enough good things about Kyle and his team. Having access to a pro of Kyle’s stature has been incredibly valuable. Hiring HV SEO was a great decision and has contributed to our tremendous success at FreshBooks.

Shout out to Kyle Roof and High Voltage SEO for helping me optimize specific pages on smartpassiveincome.com recently.

Great to see my numbers going up again

Kyle does not guess and he does not believe anything until he tests it. This is priceless in a climate where everyone claims to know the secrets of Google. Kyle debunks many of these "secrets" and shows us the facts

3 Ways Kyle Can Help You

Do you need help with your SEO? Looking for specific SEO recommendations? Want to learn effective SEO techniques?

Hire Kyle and his expert team 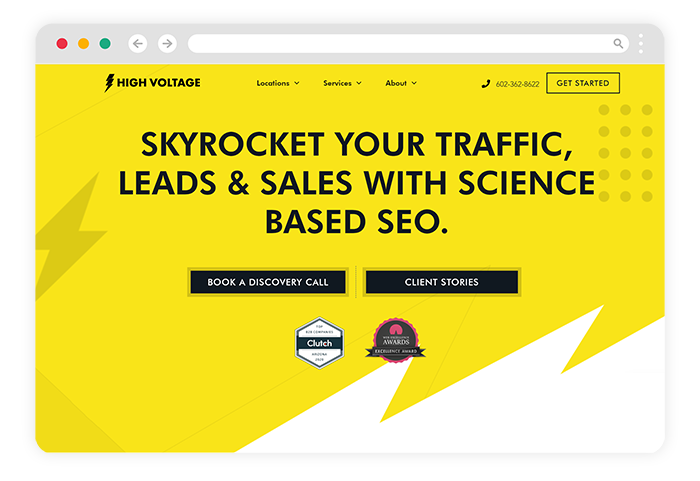 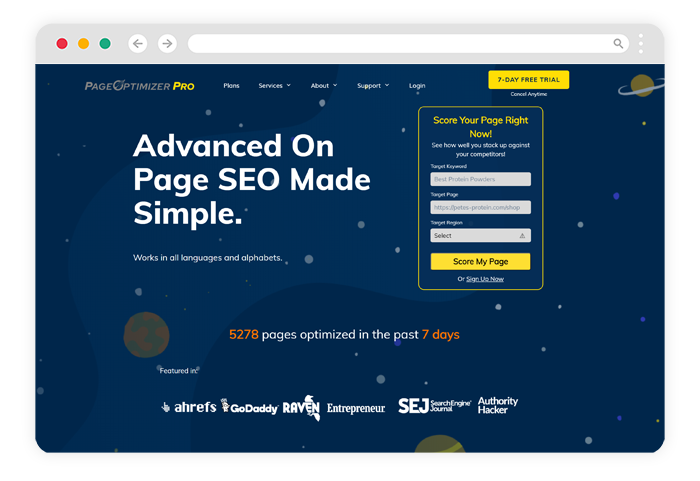 PageOptimizer Pro, or POP, is an SEO tool co-created by Kyle. Simply input your page and the term you want to rank for and POP will provide suggestions to help you improve your rankings.

Kyle shares his knowledge and techniques through in-depth courses suitable for SEO beginners and experts alike.

Optimize your way to the top

Kyle took the knowledge he gained running over 400 SEO tests and turned it into a simple, step by step blueprint that ranks with the strength of on-page optimization.

This is the exact same process he used to rank number 1 with gibberish text. 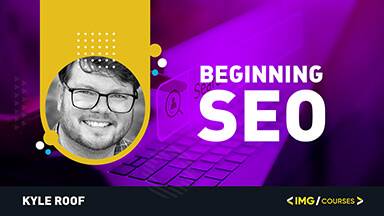 Everything starts with the right foundations.

Get your first steps in SEO with this clearly explained, simple introduction to SEO science.

Even if you are brand new at SEO, this course will make everything crystal clear. 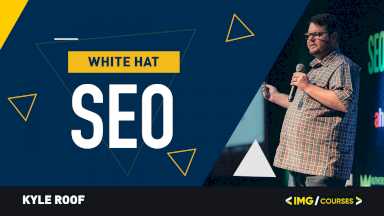 In this course Kyle reveals the safest way to rank on Google without resorting to link-building.

This is a content-first and content-only approach that works within Google’s guidelines.

You can watch these course and more on demand at IMG.

As an agency managing about 30 accounts, we felt that we had a decent system of SOP's in place. After taking Kyle's course, we were humbled that we had to update about 40% of our workflow. If you doing SEO and want to feel more confident about your skills, it imperative that you take this course. My team and I are pumped up and excited to implement what we have learned.

Compared to other courses we have purchased over the years, Kyle's teaching style and quality are by far best.

Kyle's teachings totally changed how I approach onpage SEO. I already knew that Google is an algorithm, but I wasn't fully aware how easy it is to beat. #RhinoplastyPlano

I really like the teaching style and content quality. The only suggestion for improvement I have is to cover some topics in more detail, for example schema. A question that was left unanswered is how/where do you implement schema on a page, so where do you actually insert the code snippet?

Just that I like that Kyle, Ted and Clint don't take themselves too seriously, and that I hope that they'll continue to do so!

The things I've learned from Kyle Roof have removed a lot of the "magical mystery" surrounding SEO & ranking in Google. I've begun to look at my content not as just a "I'll get the basics straight, that's pretty good" goal but instead at how it can be optimized even more. In other words, Kyle's information showed me *specifically* ways in which I can improve what I'm doing.

I believe the course is good, for several reasons: - Videos (the primary means used in the course) are short and easily "digested" - Main points are mentioned, then clarified - as opposed to undefined terms or the assumption that you already know some concepts - A specific example in which ranking was shown to be improved for a real site was shown, which is great. - It's very clear and down-to-earth. It's not presented in an academic or somewhat arrogant way as I've seen in the past. I believe this is very good and much preferred by the average person who wants to learn actionable ideas & strategies - not just for the sake of learning!

Kyle's course covers the fundamentals as he sees them, then he dives into the technical details that you may have read about, but never really understood and he explains it clearly so you can apply it in your SEO workflow. My understanding of the technical aspects of SEO are far better now than it ever was.

Kyle is an outstanding teacher on SEO. The course is well laid out and organized to follow so that concepts build on each other. Outstanding course content.

So far in my work doing SEO I have been almost exclusively focused on Local SEO, onsite SEO, and some affiliate. But armed with all my new knowledge I will be able to do much more for my clients than I ever could have before. Thanks for the great course, Kyle.

The information shared in the course is mind-blowing for a beginner/intermediate SEO like myself. I’ve been doing SEO for a year or so and I’m trying to get better at it hence I’m here learning from the “creme de la creme” SEO, Kyle Roof.

The course definitely helped me change the way I see SEO. Now I understand WHY I'm doing WHAT I'm doing instead of just guessing what to change on a page and pray it works.

The quality of knowledge is great for beginners. I'm not a complete noob and I still got A LOT of value just by seeing Kyle's thought process and how he does SEO.

Kyle has changed the way I do SEO today. For a long time, I played the guessing game. And to be fair, it can give you some decent results. But at a certain point, you hit a ceiling and you simply don't know how to move on.

What Kyle taught me, is to treat Google's algorithm as what it is: mathematics. And as we all know, mathematics follows logical rules and can be calculated.

I like that the course is separated into topical modules and the lessons are kept short but still complete. Kyle has a focus on practice rather than too much theory. If you apply what he teaches to your projects, you'll start to see results soon.

Kyle is one of the best SEO trainers in the business. The reason in my opinion is due to him actually using what he teaches. He owns an agency, uses his techniques to actually rank his own properties or customer properties. This is important.

However, his biggest advantage and the reason he sets himself apart, he tests everything he does to understand why something may or may not be working. Kyle does not guess and he does not believe anything until he tests it. This is priceless in a climate where everyone claims to know the secrets of Google.

Kyle debunks many of these "secrets" and shows us the facts. Well-tested and implemented. Great job Kyle!

It's one thing being aware of key concepts, it's another being handed a complete blueprint of how to do best practice SEO. That's what I love about this course.

Kyle is a true master of his craft and an exceptionally good teacher. Difficult concepts are broken down into terms I can understand. I truly appreciate his teaching style.

Kyle thought process on on-page SEO has made me reconsider how to rank websites.

Before we would just pick some random keywords from a tool and we were off to the races... NOT anymore.

Success leaves clues and using Kyle's strategic approach (Correlation Math) to reanalyze the SERP results, is nothing short of brilliant. Why not reverse engineer your rankings right from Google? For they are providing you with the roadmap to ranking success!

Kyle has a depth of knowledge that he applies to the SEO world and you can see it come through in his work and teaching style.

Using an almost Occam's razor approach of finding the simplest SEO answers that are going to matter the most for rankings. The course is laid out well and has tons of value!

Watch all of Kyle's courses now:

Kyle is a prolific SEO speaker and podcast guest. If you would like to have Kyle speak at your event or on your podcast, please contact Vera by email here.